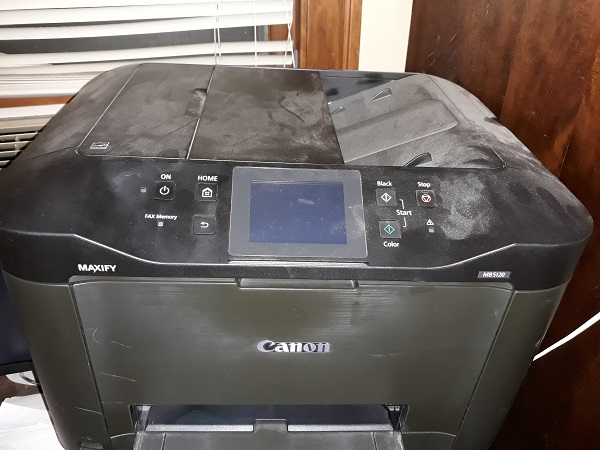 The printer pictured at the top of this post is my recently failed Canon MAXIFY MB5120, an all-in-one inkjet printer I’ve had a love/hate relationship with pretty much ever since I bought it. I loved that it printed very well and scanned very competently, at least when it worked properly. I hated the haphazard way that Canon implemented its otherwise thoughtful feature set. For example, the printer offers fairly robust paper handling, but it is so inconvenient to change paper types on this model that I mostly found myself trying to avoid doing so. I loved that this printer is primarily intended to be used as a network printer, but hated that it took at least five minutes for the printer to wake up its network interface and connect to my (wired!) network after being power cycled. But most of all, I hated the frequency with which its print head would become partially clogged. For most of the time I’ve had this printer, I could never be sure if a print job was going to print in full color or not.

This printer is not “dead”. Notice that I said it had merely “failed”. It could be fixed, if someone wanted to do so badly enough. The problem is that it needs a new print head, and the cost of a new print head is close to what I paid for the whole printer. That’s more than I’m willing to pay to fix a printer that I’m not enamored with, even at today’s new printer prices, especially considering that a new print head probably wouldn’t perform better or last longer than the original one did. But the tale of how I got to this point with my printer will demonstrate to you why I generally won’t attempt to fix clients’ printers.

As I wrote earlier, this printer has always had problems with clogging print head nozzles, no matter whose ink I used in the printer. The trouble started even before I ran out of the Canon brand ink that came with the printer. I’m also quite sure the problems weren’t caused by the print head drying out, because I normally print upwards of 20 full color pages per week. Whatever the cause, certain colors wouldn’t print consistently; sometimes, it depended on whether I was printing on plain paper, envelopes, card stock or photographic paper. When the problem became consistent, I would run the built-in cleaning cycle, and if that didn’t clear things up, I’d run the deep cleaning cycle. Usually, one or two deep cleans would get things looking right again, but by the time the printer was six months old, the built-in cleaning cycles weren’t doing any good.

I suppose I could have made a warranty claim at that point. However, the Canon MAXIFY MB5120 has a print head that can be removed fairly easily for cleaning (or replacing), unlike the printer it replaced, an Epson WorkForce WF3640 all-in-one. (Part 2 of this series will discuss more about this.) A simple head cleaning seemed like a task that should be easy enough for one who fixes computer equipment for a living, so I looked up the procedure for my MAXIFY MB5120 and went to work on it. Getting the print head out was easy enough; finding ways to flush the print head out with solvent was more challenging. The job took me the better part of 2 hours, and I left the print head out to dry overnight, but when I put the print head back in, the printer was back to printing normally. Annoyingly, there was enough solvent left in the print head that it took about 50 pages worth of printing before the ink stopped smudging, but overall, it was a win.

About a year (and two sets of compatible ink cartridges later – so there, Canon!), I had to clean the print head again. The procedure and inconvenience were the same as the first time, but again, I had a working printer when I was done. The printer continued to work reasonably well for another year and a quarter.

Then, about a week and a half ago, the printer started producing muddy, inaccurate colors, skewing to red/brown. Clearly, there was a problem with cyan ink delivery. In fact, the built-in nozzle test print showed that the printer wasn’t squirting any cyan ink at all. The built-in cleaning and deep cleaning cycles didn’t restore even a little cyan ink flow, so out came the tools, and out came the print head for another manual cleaning. Only this time, when I put the print head back in, it still wasn’t delivering any cyan ink. Well, that wasn’t good. I could see the ink flowing during my cleaning procedure, so I was sure I wasn’t just experiencing a bad clog. Then the printer began having trouble recognizing the ink tanks. That combination is a pretty good sign of a print head gone south.

I went searching online for a replacement print head, but quickly discovered that the only thing harder than finding a print head for this printer that cost less than I had paid for the whole printer was finding one that I could get in the first place. Most sellers were out of stock. That wasn’t surprising, because my printer is almost three years old, and Canon doesn’t seem to be producing it anymore. (It’s still available as new-old stock from some online sellers, for about twice what I paid for it, but I don’t like this printer enough to pay that much for another one.) I finally found an Amazon seller offering the print head for just over $50, so I went for it.

A few days later, my replacement print head arrived. The inner foil package was torn open, the plastic head protector was missing and there were drops of clear liquid all over it; not good signs. Nevertheless, I installed it in the printer, put in my ink tanks, powered up the printer and… the printer displayed an error code. It didn’t take much troubleshooting to determine that I had received a faulty print head, so I filed for a return, and the seller sent out another one. The second print head looked more promising, as the package was properly sealed. The printer didn’t display any errors after I installed it, but when I printed the nozzle test, the cyan, yellow and magenta test patterns were fine, but there was a big gap in the black test pattern. I ran another cleaning cycle, followed by a deep clean, neither of which fixed the problem. Not surprisingly, when I tried printing a web page as a live test, much of the black text was unreadable. It was now apparent that a) the print head seller was peddling refurbished print heads, and b) he was doing a poor job of refurbishing them. I filed for another return, and was only offered the option for a refund this time, which was just as well because I really didn’t want to find out if the third time would be the charm or not. So, I am now in the market for a new printer, which will be Part 2 of this series.

Let’s recap what this process has entailed so far, and the amount of time I’ve wasted doing it. First, there was the job of trying to clean the original print head. That took about two hours of my time, not counting downtime for the printer. Then there was shopping around for a replacement print head, which took about another hour and a half. Then we have removing three print heads and installing two (remove original, install first replacement, remove first replacement, install second replacement, remove second replacement), each of which took about 15 minutes. Finally, there will be the time and inconvenience of taking the defective print heads to my nearest Amazon dropoff so I can get my purchase price back, which will be another half-hour. All together, that’s 5.25 hours, which would be up to $446.25 of billable time, if I were doing this for a client.

And there’s the rub, as Shakespeare might have said. Most inkjet printers aren’t worth $446.25. In fact, even with today’s inflation goosed, supply chain affected printer prices, most of you would be loath to spend more than $300 on a brand-new inkjet printer, much less $400+ to fix an old one. That’s why if you call to ask me to come and fix your printer, I will most likely tell you to just replace it. It’s not because I’m lazy or I feel that printer repairs are beneath me. It’s because I know from experience that trying to fix your printer will cost too much money with too little chance of success to be worth the attempt. In the end, you’ll spend less money and be more satisfied if you cut your losses and buy a new one.