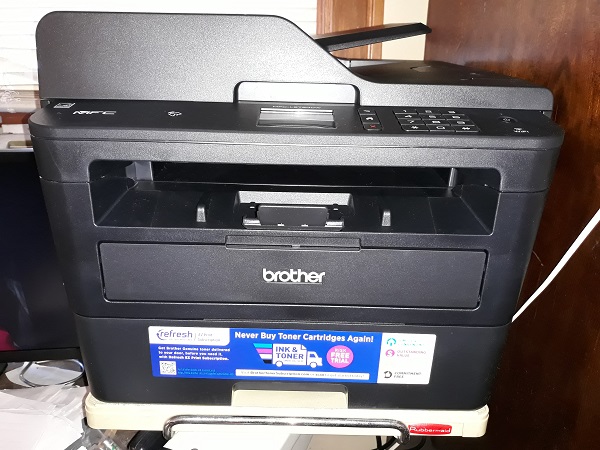 In my last post, I explained why I won’t attempt to fix printers, particularly inkjet printers, for clients, and I illustrated my reasons by showing how my own inkjet printer had developed a problem that was too expensive to fix, even though I was providing my own skilled labor. That undoubtedly left you wondering what printer I would recommend, and perhaps hoping that I would demonstrate my choice by buying one for my own home office. Well, I am going to partially disappoint you. I’m not going to make any printer recommendations, because I don’t find any affordable printer satisfactory. For the last year or so, I have been telling clients to just go out and buy a printer they like, and I would set it up for them as best I can. But since I now had to make this very decision for myself, I thought it might be helpful for you to see how an IT pro goes about determining which printer is the least of all the evils for his own use.

In the affordable (under $500, considering today’s prices) printer space, the first two options – color/monochrome and printing technology – are more or less considered together. If you expect to print in color, that dictates an inkjet printer, because color laser printers are relatively bulky, heavy and start at over $500, and none of the color laser printers that cost less than $1,000 will print color photographs well. If you have no use for color, and just want a monochrome printer, then you’re automatically looking at monochrome laser printers, because except for specialty printers, there are no monochrome inkjet printers. The last time I owned a laser printer was in the mid 1990s, when I obtained a secondhand HP LaserJet Series II. Since 1998 or so, when I bought an HP DeskJet 720c, I had only owned color inkjet printers. They were good for the kids’ homework assignments, which often involved color graphics, and for awhile, I also printed my own greeting cards and photographs. So, I figured on getting another color inkjet printer.

Next came the options. In addition to printing, I do a lot of scanning and some copying, so an all-in-one printer makes the most sense for me. I usually print on both sides of the paper in order to save paper, so duplex printing was a must. Much of the scanning I do involves multiple pages, often both sides of each page, so my new printer would also need to have a document feeder and support automatic duplex scanning as well. Finally, I have multiple computers that have to use the printer, and it will occasionally be used by a tablet and maybe a smartphone or two. That meant my new printer would need to be a network printer, and since Ethernet is a much more reliable way to network a printer than wi-fi is, I wanted the new printer to have an Ethernet connection option. My Epson WorkForce (second to last printer) had two paper trays, so I could load photo paper or envelopes without unloading my regular letter paper. My Canon MAXIFY (last printer) lacked that, and its paper handling was inconvenient in comparison, but still, this would be a nice-to-have feature, not a must-have feature. So… I wanted an inkjet all-in-one printer with a document feeder, automatic duplex printing, automatic duplex scanning and an Ethernet connection, multiple paper trays optional.

Now it was time to consider brands. This narrowed my choices considerably. I have learned to avoid HP all-in-one printers, and some of their simple printers, because I have come to consider HP’s printer software dysfunctional. In the years after I bought my aforementioned HP DeskJet 720c printer, HP continued to develop the software package that they distributed with their printers. Its core components were given ever more features, making it more capable, but also making it arduous to install, a drain on computer resources, and prone to malfunctioning, which often needed to be fixed by uninstalling and reinstalling it, doubling the arduousness. More recently, HP replaced all that with a new app that they call HP Smart. The problem with it is that I have found the name “HP Smart” to be a misnomer. HP Smart is supposed to detect your new HP printer, find whatever drivers and software it needs and install them. In my experience, though, HP Smart fails to do that, requiring me to seek assistance online to get the printer installed. Once everything is up and running, HP Smart also becomes the scanning software, if the printer is an all-in-one, and in most cases, it doesn’t support scanning directly from the printer console. That’s not the end of the world if the printer is right next to the computer, but it’s a nuisance when scanning to a computer across the room or in a different room. So, no HP models for me.

My last two printers were an Epson WorkForce model, with what Epson calls “Precision Core” technology, and a Canon inkjet model, both of which failed prematurely due to print head clogs and failures. My online investigations indicated that this is an ongoing problem with Epson and Canon models. Still, technologies evolve and improve with time, so I might have been willing to take a chance on one of these brands again if I had been able to find one for less than $150 with the features I wanted. But I found that inkjet all-in-one printers with document feeder, automatic duplex printing, automatic duplex scanning and Ethernet connection were priced in the $300 range. For that kind of money, I wasn’t taking a risk on another Canon or Epson model.

That left Brother and a small selection of off-brand printers. The problem with off-brand printers is that consumables – ink, mostly, but sometimes other parts – might be hard to find. And it turned out that the only Brother models that had the feature set I wanted were large-footprint printers that could accommodate ledger-size paper. I have no use for ledger-size printouts, and I have no room for a printer that large. Those bruisers were expensive, too, with prices starting around $450. So, I found myself at a dead end.

That’s when I decided to reconsider whether or not I needed to be able to print in color. I haven’t printed a color photograph in over a year because I’ve found a number of online services that charge less to print and mail me color photos than I would pay for ink and photo paper to print them myself. That’s not as convenient as the ability to print my own photographs on a whim, but I almost never need color photos right away. My two older children used to print homework assignments in color all the time, but I only have one kid in high school now, and she mostly submits her assignments online and rarely needs to print anything. I haven’t made my own greeting cards in years, and I don’t think I even have any greeting card stock left. None of my business printing requires color.

Relieved of the need to stick with inkjet technology, I started my shopping expedition over again, this time looking at compact monochrome laser all-in-one printers with document feeders, automatic duplex printing, automatic duplex scanning and Ethernet connections. I found far more and better options. I still ruled out HP because of software concerns, and Epson doesn’t make any laser printers, but I knew of some venerable Brother MFC-L2700 series models and Canon imageCLASS MF200 series models that would likely be in my price range. I also hoped to find some small business models from Lexmark, Okidata, and Samsung.

In the end, the best deal I found was on the Brother MFC-L2750dw pictured at the top of this post, so that’s what I purchased. I knew it would do everything I needed it to do, because I have resold that same model to clients in the past. It uses two consumables other than paper: toner cartridges, which yield anywhere from 2,500 to 5,000 pages depending on the capacity you buy; and drum units, which last for about 15,000 pages. Brother-branded toner cartridges aren’t overly expensive compared with other printers’ branded cartridges, and Brother’s MFC-L2700 line is very popular, so there is very affordable 3rd party toner available for it. I’ll probably stick with Brother branded drums, which also aren’t terribly expensive, especially since I anticipate that mine will last 3-4 years apiece at the rate I print.

My new Brother MFC-L2750dw printer doesn’t have dual paper trays, but it does have a single-sheet override slot. That should make envelope printing more convenient.

Printer reliability has been a sore spot for many years now. My inkjet printers have lasted about 4-1/2 years on average, and even laser printers, which were once known to outlast virtually all other kinds of office computer equipment, now sport a lot of poorly made plastic parts. However, I’ve resold the Brother MFC-L2750dw and its predecessors to about 20 clients, and most of them have lasted 7 years or more. At least one that a client bought in 2010 or 2011 still works perfectly and has never needed anything more than consumables and an occasional paper jam removal. So, the chances of this one lasting longer than two inkjet printers – that’s roughly my break-even point, if we only consider the price of the printer – seem pretty good.

Is the Brother MFC-L2750dw perfect? No, not at all. I really wanted a color laser printer, but affordable, compact color laser printers that print photographs well do not exist. Professional reviews of this model suggest that other laser printers, such as the Canon imageCLASS MF200 series and most HP LaserJets, have better print quality, especially on graphics and very small fonts. And the MFC-L2750 printer driver on my laptop already messed itself up once and I had to reinstall it. But as I said at the beginning of this post, no affordable printer is truly satisfactory. As long as this one’s shortcomings are things I can live with, that’s the closest thing to a win that I can expect.