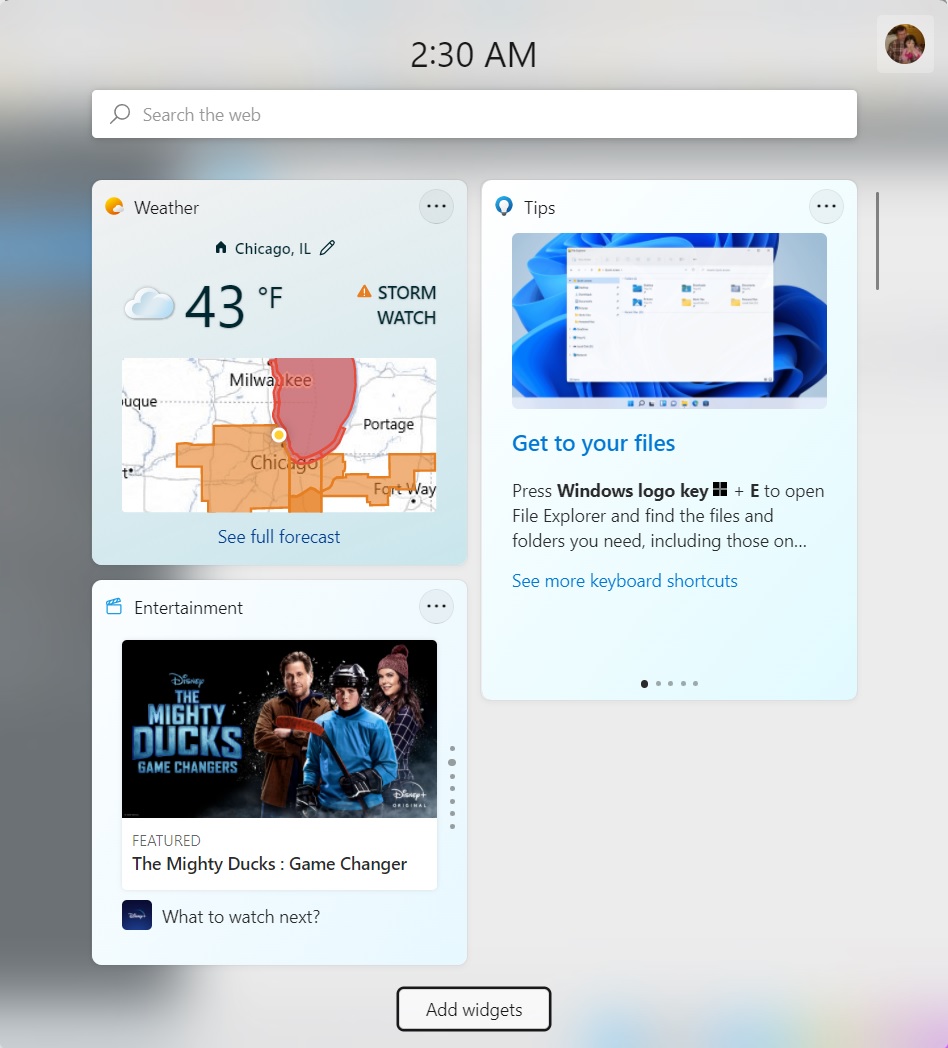 Windows Vista, which many people don’t remember because it was widely considered a rough draft of Windows 7 as well as the second-most-infamous Windows That Should Never Have Happened, introduced an interesting, entertaining and even somewhat useful Desktop feature called Sidebar. Sidebar was a narrow rectangle of Desktop space, resembling a filmstrip, that could display clickable rectangles of information on the Desktop. Each of those rectangles contained a mini-app, which Microsoft called a Gadget, which was written in some combination of HTML and web scripting languages. Users could control the dimensions of the Sidebar and how many Gadgets were in it. It was probably used most often to display a clock, although I recall seeing Gadgets that displayed news feeds and thumbnail slideshows of the user’s Pictures library. Sidebar was available for awhile in Windows 7 (also, curiously, in Windows Server 2008), but at some point, Microsoft began recommending that users stop using it because its ability to run HTML and web scripts outside of the “sandbox” of a web browser made it a security threat. Microsoft eventually removed it about halfway through Windows 7’s lifecycle.

In the meantime, people were introduced to smartphones and tablets, both of which allow users to place handy information displays on their home screens using elements called “widgets”, at least on Android phones and tablets. For example, I placed widgets that display weather information, my current day’s schedule and my top five Evernote notes on my Android smartphone’s home screens. I can tap on the information in those widgets to open them up in their respective apps and interact with it.

Given how useful widgets are on phones and tablets, it’s not surprising that Microsoft decided to try another stab at bringing that functionality to the Windows desktop. And in Windows 11, they have done exactly that in a new feature called, predictably enough, Widgets.

However, Widgets in Windows 11 behave differently from widgets on a smartphone. I actually consider that a good thing, because I, for one, use my desktop and laptop computers very differently from the way I use my smartphone. The nature of a smartphone – small screen that can really only display one app at a time, and limited processing power and memory that really aren’t that great at multitasking – pretty much guarantees that you’ll be returning to your home screens often. And every time you do so, you see your widgets. Contrast this with a computer. I don’t know about you, but I always have lots of windows open on my computers, and I switch among them using keyboard shortcuts as the Taskbar, so I rarely see my Desktop. If my Widgets lived on my Desktop, I wouldn’t see them often, and they wouldn’t be convenient to access. So, Windows 11 provides a Widgets window for looking at and interacting with Widgets.

You can open the Widgets window from your Taskbar:

If you don’t see the Widgets icon, circled in the picture above, you may have turned it off. To turn it back on, simply right-click on the Taskbar anyplace where there isn’t a program icon, choose Taskbar Settings from the context menu and then turn Widgets back on from there.

Click on something displayed in any widget to open it up in a web browser — Microsoft Edge, of course. Widgets with a line of horizontal or vertical bubbles contain multiple windows of content. Hover your mouse over the line of bubbles to make its scroll arrows appear, and then click on one of the scroll arrow to move to another item in the widget. The selection of widgets and their content appear to come from the same sources as the MSN news feed that Microsoft Edge displays on new tabs if you selected the “Informational” option when you set up Edge.

Do my Widgets look a little sparse and lonely? Don’t worry, there are plenty more. Did you notice that the window has a scroll bar? (To be fair, it’s hard to notice the scroll bars in many Windows 11 windows. That’s one of the things I dislike about it.) Here is another screen print to point it out:

There, now you can’t miss it – I’ve put a red oval around its slider. Slide that down, or press the down arrow or Page Down on the keyboard, and you quickly find that there can be many more pages of widgets. Here’s the next screenful of mine:

You can move your widgets around by dragging and dropping them within the Widgets window. The process feels similar to rearranging the Start menu in Windows 10, actually. Also notice that each widget has a horizontal 3-dot button in its lower right corner. This allows you to customize the widget’s size, content and other options, or remove it from the Widgets window.

If you accidentally delete a Widget that you’re interested in, or you simply want to see what other widgets you can add, scroll back to the top of your Widgets window, and click the “Add widgets” button:

Doing this will, of course, display a window of widgets you can add: