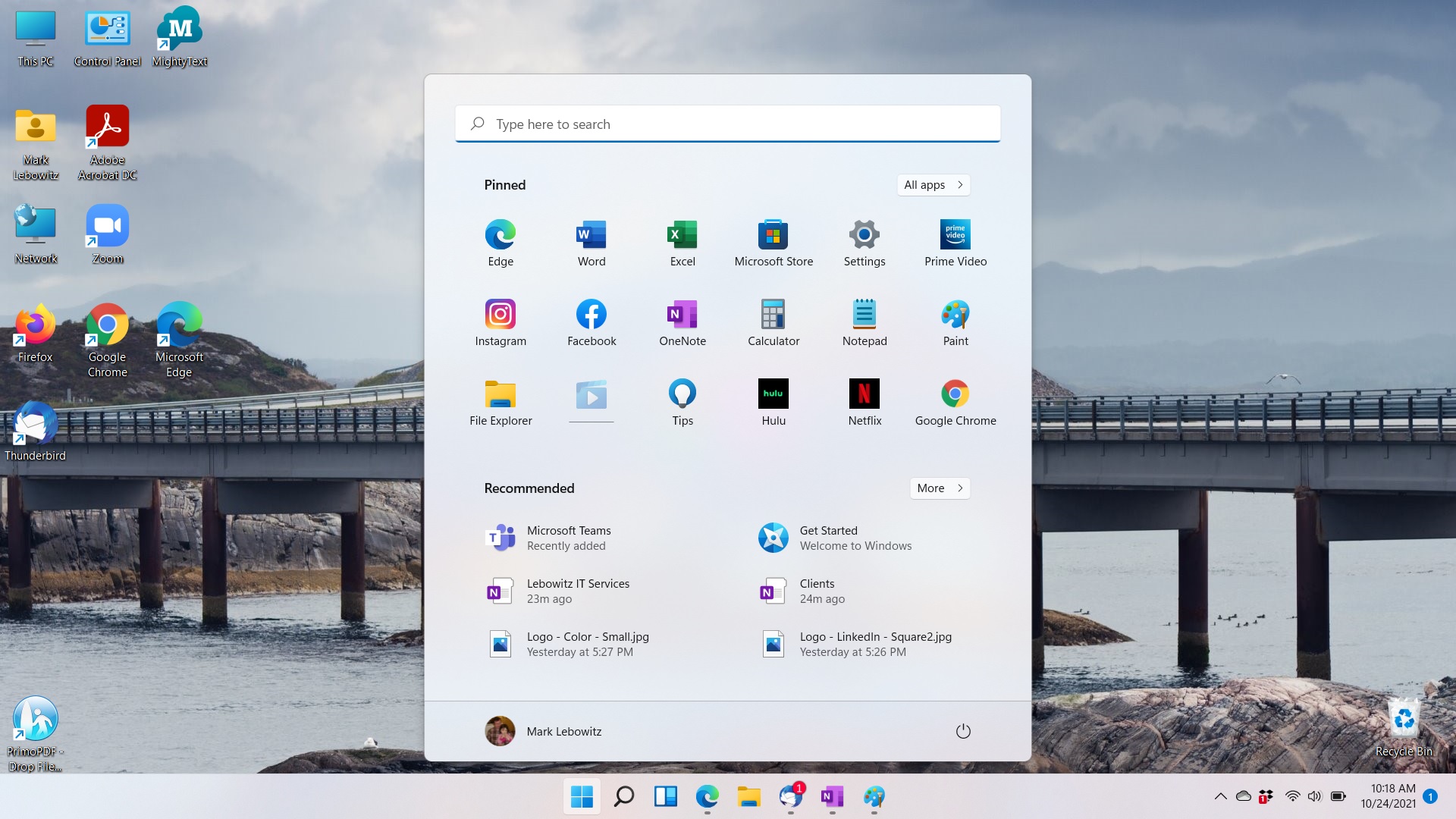 Microsoft’s recent release of Windows 11 has spurred a fair amount of online chatter, much of it negative. However, whether the online talking heads like it or not, it is here, and a look at computer sellers’ advertisements and store displays makes it clear that if you’re shopping for a new computer, there’s a very good chance that the one you bring home is going to come with Windows 11 installed on it. Since I’m in the business of supporting computer equipment, and it stands to reason that it won’t be long before I start getting calls from people who need help with Windows 11, I decided it was best for me to begin familiarizing myself with the new operating system. So, when Windows Update offered me the upgrade free of charge on my laptop, I accepted the upgrade. And as long as I’m getting up close and personal with Windows 11, it occurred to me that this also presented me with a great opportunity to re-animate my stagnant blog by sharing my experiences with you. As an adorer of alliteration, I have decided to post these experiences midweek every week (at least until I run out of experiences) on what we will call Windows Wednesdays.

Let’s start with a very basic question: Should I get it, and, if so, how?

The first part of that question brings to mind a host of tired comparisons and recommendations from online pundits, most of whom have only experienced a pre-release version of Windows 11 and maybe not even that. “You never want to get Version 1.0 of anything.” “You can always tell who the pioneers are; they’re the ones with arrows in their backs.” “It’s evolutionary, not revolutionary.” And while there is truth to such statements, I can tell you that, at very least, Windows 11 has been quite stable for me. That’s not to say there haven’t been a few glitches. For example, after the first update Microsoft pushed out (about 48 hours after I got the upgrade), my laptop developed an irritating habit of losing Internet access over its wi-fi connection. A new cumulative update I received last night (six days after I got the upgrade) seems to have cleared that up. But this is no worse than my initial experiences with Windows 11’s predecessor, Windows 10. Sure, it’s going to take a little while to shake all the bugs out, but so far, I haven’t encountered any show stoppers, just annoyances. At the moment, I’m not recommending that anyone rush out to get Windows 11, but I have yet to encounter any problems serious enough to advise avoiding it altogether.

If you’re in a hurry to get Windows 11 for some reason, you can download an installer on your own from https://www.microsoft.com/en-us/software-download/windows11. The installer will run the same compatibility checks that Windows Update runs, though, so if Windows Update tells you that your computer is not compatible, this download will not install Windows for you, either.

So what makes your computer compatible or incompatible with Windows 11? The most publicized requirement for Windows 11 is the presence of a TPM v2.0 chip in your computer. TPM stands for Trusted Platform Module, and it’s a hardware security chip that, up to this point, has mostly been used in corporate PCs as a hook for network security systems employed by medium to large businesses. Windows 11 uses TPM v2.0 to make it more difficult for cyber-criminals to gain access to computers. Other requirements for Windows 11 are much more conventional, and generally any computer that runs Windows 10 will meet them. There is plenty of information about this elsewhere online, as well as several methods for getting around the TPM v2.0 requirement. These, as well as the reliability of the TPM work-arounds, are beyond the scope of what I want to discuss in this series, so I will not be investigating them. I’ll simply say that if the compatibility checks indicate that your computer isn’t compatible with Windows 11, then that’s as good an excuse as any to stick with Windows 10 until you buy a new computer.

Will Microsoft attempt to force users to install Windows 11, as they did with Windows 10? As of right now, the answer appears to be no. Between the TPM requirement and, no doubt, lessons learned from the by-hook-or-by-crook automatic upgrades when Windows 10 first came out, Microsoft doesn’t seem to be pushing Windows 11 aggressively, at least not to Windows 10 users.

Should you get Windows 11? The fact is that at this time, there is no good reason why you should. At least for the time being, Windows 11 doesn’t do anything that Windows 10 can’t, there is no software on the market at this time that requires Windows 11, and Microsoft has announced that Windows 10 will be supported until October 14, 2025. So, if you’re currently using Windows 10 and you’re happy with it, then stick with Windows 10 and don’t worry about upgrading. If you recently purchased a new computer that came with Windows 11 or is being offered Windows 11, or you are considering purchasing one in the near future, then stay tuned and enjoy this series.

And don’t worry, most of the entries in this series will be much shorter than this one!