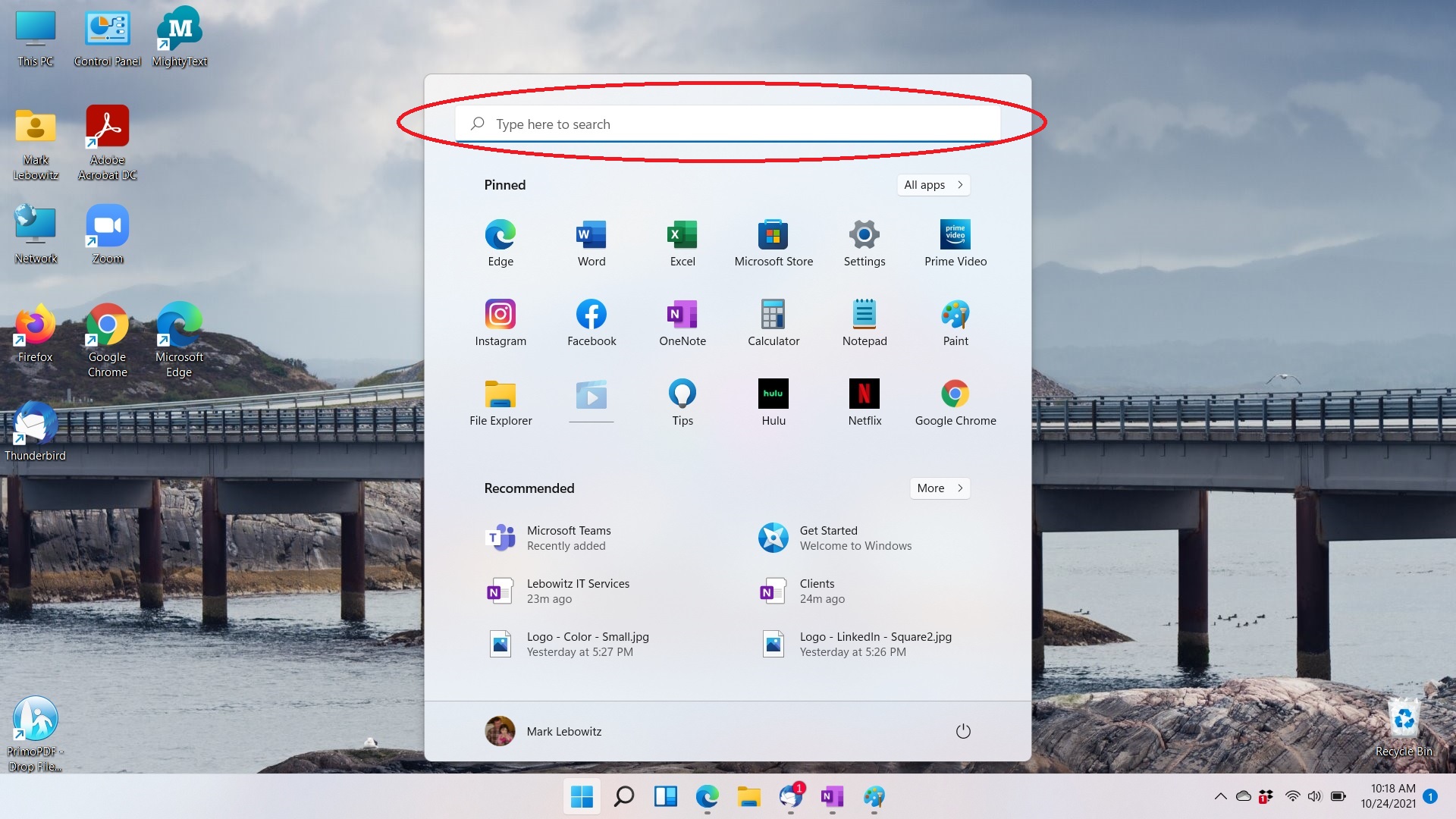 One of the first things you notice when you display the Windows 11 Start Menu is that while it’s still there – unlike Windows 8, where it wasn’t – it’s a departure from Windows 10, which brought back something resembling the venerable Windows 7 Start Menu. Gone are your categories of tiles, and gone, or at least hidden, is the alphabetical list of programs. They’ve been replaced with a collection of pinned apps and a curious section labeled “Recommended”. We will explore those in future posts. Right now, though, a user new to Windows 11 could be forgiven for thinking, “How the $#^@& do I find anything in this new Windows?!” Fortunately, Windows Search is still here, it’s prominently featured (I’ve circled it in the lead screen shot, above), and it’s better than ever.

Windows Search has been around a long time – about 20 years, in fact. It was first added as an optional update in Windows XP, but that early edition of Windows Search was balky, slow, not very effective and tended to cause the whole computer to get sluggish. But with every version of Windows since then, Windows Search has become better and more tightly integrated. Many people never discovered that they could click the Windows 7 Start button, begin typing without pointing the mouse at anything and find menu items, Control Panel applets and software. That was too bad, because it brought much of the power of Windows 7 right to your fingertips. It was invaluable in Windows 8, which had an annoying habit of hiding frequently-used tiles in unintuitive places. I still use the click-Start-and-search trick constantly on my Windows 10 desktop PC, where it does a decent job of finding data files as well as software. My experience with it so far on my laptop suggests that it’s one of the handful of real under-the-hood improvements in Windows 11.

While searching for software this way in Windows 10 is usually faster than scrolling the alphabetical app list in the Start menu when I need a program that isn’t pinned to Start or the Taskbar, I’ve often found that newly installed software can take several days to get indexed by Windows Search, and, some software, particularly infrequently-used programs, just never seems to show up at all. It does a better job of indexing data files that are stored in common locations, such as Documents or Pictures. And depending on how busy the computer is, searches can sometimes take awhile, and occasionally fail. But all this seems to work like clockwork in Windows 11!

Here, I’ve done a search for the Intel Driver & Support Assistant, a program I don’t run frequently from the Start menu. (It auto-launches in the background, and I usually launch it via the Taskbar Notification Area.) By the time I finish typing “intel” I see:

Similarly, here’s a search for a spare computer parts Excel workbook that I’ve never actually opened on this laptop before. As with the program search, I’m barely done typing the first word of the title when Windows finds it for me:

Windows Search in Windows 11 is so good at finding everything you need that you could probably use the new operating system productively without learning how to navigate the new interface at all!