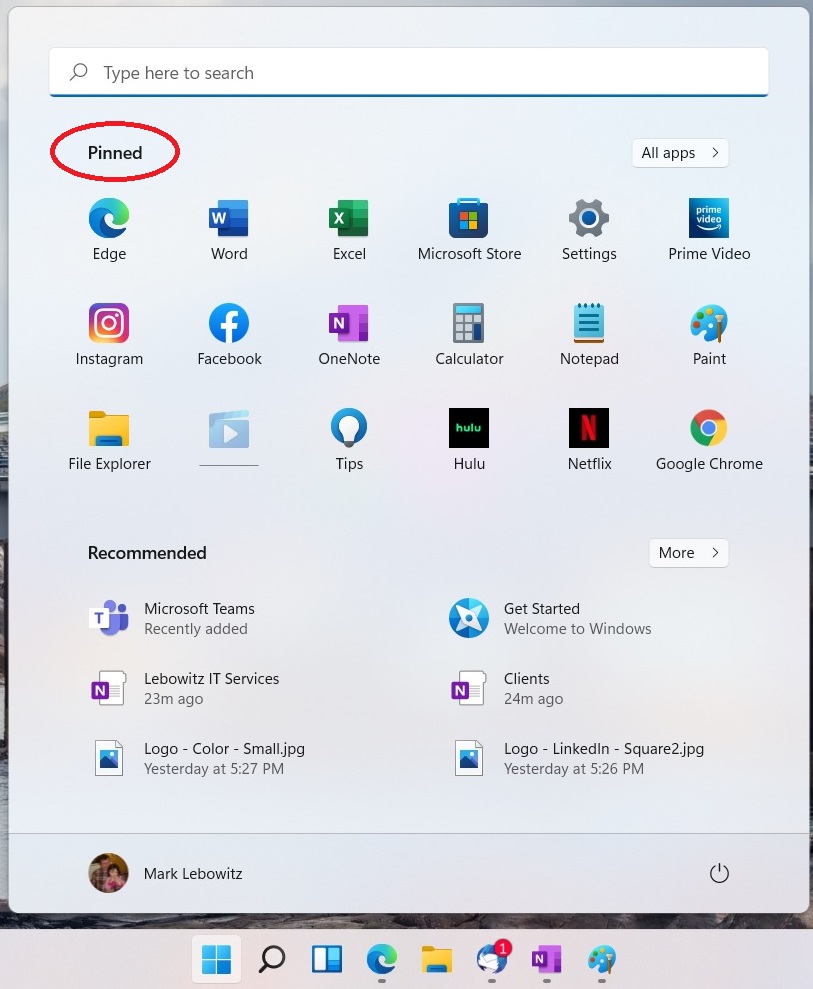 Everyone who has used Windows for awhile knows how to keep your most frequently used programs close at hand: just create a desktop shortcut for that program, of course. But what if you’re one of those desktop packrats whose Windows desktop is an unsorted, edge-to-edge array of program shortcuts and data file icons? Enter the Start Menu shortcut.

Displaying the Start Menu has been simple enough in all versions of Windows since Windows 95 (except for Windows 8, which used a “Start Screen” that behaved differently, but we’ll ignore that for now). Just click your Start button or press the Windows key (the key with the Windows logo on it), and there it is.

Pressing the Windows key also makes the Windows 11 Taskbar appear, if you have yours set to automatically hide itself when you aren’t interacting with it. If you didn’t set your Taskbar to auto-hide, then it’s visible all the time. Either way, this Taskbar functionality is identical to prior versions of Windows, going back all the way to Windows 95. What has changed in Windows 11 is that it’s easier to pin frequently-used icons to the Taskbar that it was in Windows 10 and Windows 8, and that’s what today’s Windows Wednesdays installment is all about.

… then right-click on the program icon you want to pin (Audacity, in this example)…

… then click on More, which displays a fly-out menu …

… and, finally, click on “Pin to taskbar”. Your icon is now pinned to the Taskbar, as shown here:

It’s actually a little easier to pin an icon from Windows Search. Click the Start button or press the Windows key on your keyboard to display the Start menu.

Then begin typing. Optionally, you can click first in the “Type here to search” field, but if you don’t, Windows will know to send your keystrokes to that field. In this example, we’re searching for Audacity. As indicated by the gray characters at the end of the word in the “Type here to search” field, as shown below, even before we finish typing the name of the program, Windows has already made a good guess as to what we want!

Calculator is an app that I use often enough that might want to move to the Taskbar, so I’ll use that as an example. First, click the Start button.

Next, right-click on the Calculator icon.

Finally, click “Pin to Taskbar” from the context menu.

That’s all there is to it.

There are still more “Pin to Taskbar” instances I could show you, such as pinning an icon from File Explorer or from the Desktop, but this is already a very long post, so I think I will save those for later installments about managing the Start Menu and changes to File Explorer.