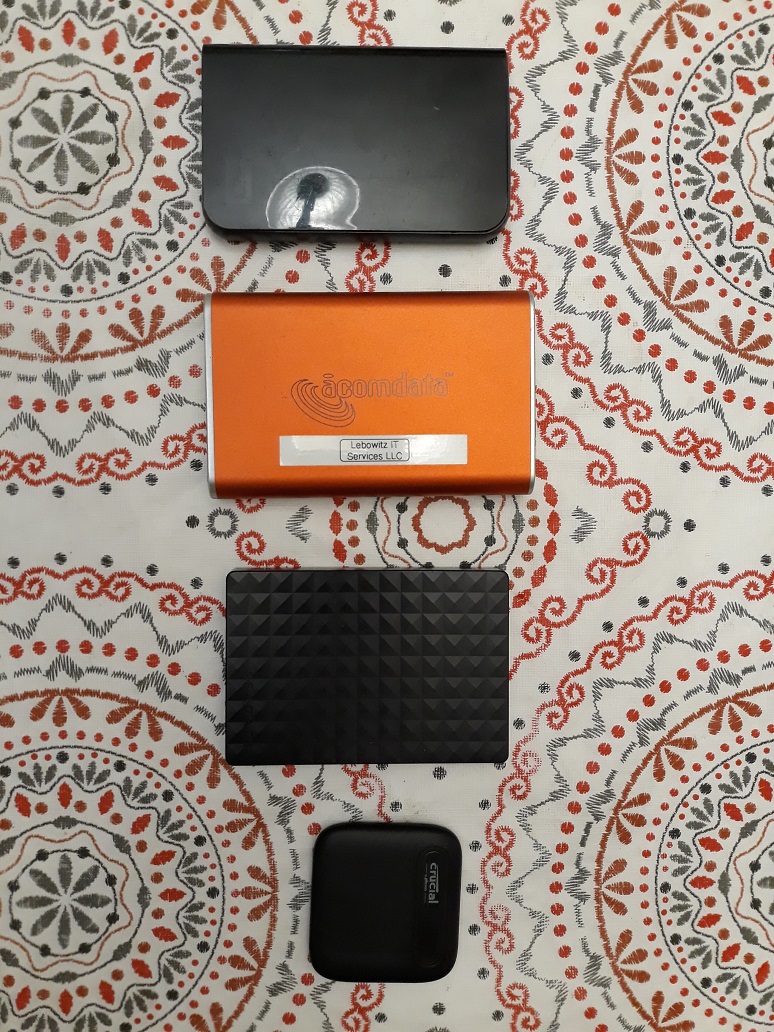 Some of the work I do involves transferring data from one device to another. This includes computer storage drive upgrades, recovering data from non-working computers. getting data from PC to Mac or vice versa, and more. To do this, I have an array of USB devices of various types and capacities, including flash drives (also known as “thumb drives”, which is the equivalent of calling a facial tissue a “Kleenex”, or “pen drives”, a phrase that I believe originated in the UK, although I don’t know its etymology) and USB hard drives, as well as several devices that enable me to connect several different kinds of internal hard drives and solid state drives to a computer’s USB port.

I recently needed to replace my 1TB USB hard drive. A lot has changed since I purchased that 1TB USB hard drive, in terms of the per-gigabyte cost of storage and the technologies used to connect them. Mulling this over, I still rarely need drives larger than 1TB, but since most computers nowadays have at least one USB 3.x port, many also have the smaller, more versatile USB C ports, and data recovery tools that run outside of Windows have supported both of those connections for some time, I opted for a Crucial X6 SE USB 3/USB C Solid State Drive. I’ve had an opportunity to use it a couple of times now, and when plugged into a healthy computer that supports its fastest connection options, it can copy large amounts of data in blessedly short periods of time. (Of course, if the computer isn’t healthy or only supports a USB version older than 3.0, it will be limited to much slower speeds.) As a solid state drive, it’s also fairly impervious to drop damage, unlike my USB hard drives. And it’s compact and lightweight enough to have a permanent home in my laptop bag. It’s surely a fine addition to my toolkit.

Looking over my collection of USB drives, pictured above, offers a snapshot of how external storage has evolved over the last 15 years or so. Note that all of these drives cost $85 or so at the time they were purchased.

Starting from the top, I have a Western Digital My Passport 250GB model, official model number WD2500ME-01. This is a very old drive, purchased new sometime in 2007-2009, since all the manuals I can find for this line of drives mention support for Windows 98SE through Windows Vista. (Windows 7 came out in 2010.) It works well enough, but the conventional hard drive inside spins at only 5400 RPM, which is on the slow side for a hard drive, and its interface is USB 2.0. Between its relatively slow speed and small capacity, I only use it for small data transfers, and then only if my other drives are unavailable.

Second from the top is a unit that started out as an Iomega Prestige 500GB model. The reason it’s in a funny-colored case that says “acomdata” instead of “Iomega” is because I transplanted it into a 3rd party drive enclosure. Iomega, which was known for its innovative storage products in the 1990s, was no longer so innovative by 2012, when I bought this drive. They were selling relatively low-cost USB hard drives, though, which is mainly what attracted me to this model. I hadn’t owned it for six months when its mini-USB port broke. Since it was still under warranty, I sent it in for warranty service, finding out in the process that Iomega had been acquired by Lenovo, which fulfilled my warranty. Alas, the mini-USB port on the drive I got back didn’t last any longer than the first one did. At that point, I could still have sent it in for yet another warranty repair or replacement, but a quick look on Amazon.com told me that I could get a 3rd party enclosure for the drive for about what it would cost me to send the drive back to Lenovo again. I gambled that the mini-USB port on the 3rd party enclosure would last longer than the one on another Prestige drive would. That gamble paid off, and the drive still works fine. However, like the WD My Passport drive, it doesn’t get used often anymore, because while its capacity is more in line with what I need for data transfers, its USB 2.0 interface makes it quite slow, although not as slow as the My Passport drive.

The third drive from the top is a Seagate Expansion 1TB USB hard drive. I bought it in 2017 or 2018, and it’s the drive I’ve been using most often, because its USB 3.0 interface makes it much faster than the WD My Passport and the Iomega Prestige. I actually used to have two of these, but one was ruined when I dropped it on the floor accidentally. Unlike the My Passport and the Prestige drives, whose drives could theoretically be replaced with off-the-shelf hard drives or solid state drives, the Seagate Expansion uses a specially-made hard drive with a USB circuit board instead of a conventional SATA board. This meant there was nothing I could do but recycle the whole thing. This is the drive that’s being replaced.

Finally, at the bottom, we have my brand new Crucial X6 SE. The solid state drive inside it is many times faster than the conventional hard drive in the Seagate Expansion, and when plugged into a computer with a USB C port (or a USB 3.2 Type A port), it supports data transfers of up to 800MB/sec. Its real-world maximum speed is probably closer to 500MB/sec, but that would still make it three times as fast as the Seagate Expansion drive it replaced. (Despite USB 3.0’s theoretical top speed of 625MB/sec, I’ve never seen the Seagate Expansion copy faster than 175MB/sec, and it rarely exceeds 130MB/sec.) That means it’s far better for moving data to and from modern computers with very fast NVMe solid state drives.

It’s always interesting to see how technologies evolve over time!